When the world feels particularly scary, I look for a book that makes me laugh and takes me away from thoughts of global disaster.  Domestic disasters seem to cheer me up. 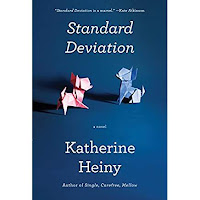 Standard Deviation by Katherine Heiny was such a book.  This funny, tender tale of a marriage, the second for him, first for her, made me laugh out loud. Infidelity, house guests, origami, parenting are all covered here through the voice of Graham, the husband. Graham and Audra have been married 11 years and have one son, Matthew. He has Asperger’s and has some eccentric friends, but the book is not about raising a child with a disability. Well, maybe it is in some ways. But it also makes readers smile about daily domestic life and ex-wives. Audra, the wife, is an energetic talker and a people person without filters. Graham’s first wife, Elspeth, comes into their lives and this makes Graham re-consider his marriage and look at his life more closely.

His observations about life are spot on. For example, Graham thinks, “there should be a houseguests’ club, like the kids’ club in a resort, where your houseguest could watch movies and play games and have a snack while you recharged your batteries.” I personally thought this was such a clever idea. Graham also thinks about one of the great paradoxes of parenting as he drops his child off for a play date with a new friend. Graham does not know the parents but is so eager for his child to have a friend, that he just leaves his child with a father that he probably wouldn’t hire to work for him or lend money to or trust to house sit his apartment or valet park his car. “But leave their only child with for two hours? Oh, well, sure, no problem!” He says, “No one tells you shit about parenting ahead of time, really. Well, they do but not anything useful.”

While there were some melancholy moments with hard truths, I mostly laughed throughout this book. And laughter is the best medicine. So thanks to Katherine Heiny, her clever first novel came to me right when I needed it. I’ll be looking for more from this talented author.
Posted by Harriet Riley at 3:27 PM