Before the year ends, I am compelled to add my Best Books of 2012 to the cyber sphere. I’ve seen several lists in the last week or two and feel like I should look back over the books I read and enjoyed in 2012 and share my favorites.
First of all, I’ll always remember 2012 as the year I discovered YA author John Green. My older daughter introduced me to him and I quickly read all his books and heard him speak twice in January. It was a big year for Green with the release of The Fault in Our Stars. I know I wasn’t alone in my enjoyable discovery of his books. I also count reading the Australian fiction standout Jasper Jones by Craig Silvey as one of the highlights of my reading year. I will continue to encourage everyone I know to read that soon-to-be classic.
But the book that stands out from all the rest is a novel I haven’t reviewed yet. I didn’t feel I could do it justice. However, I cannot let 2012 end without sharing the most stunning book I read this year, maybe ever. The Cellist of Sarajevo by Steven Galloway, published in 2008, just came to my attention this year, thanks to my book club and dear friends Beverly and Linda.  Words cannot do justice to this perfect novel.
With a theme that offers hope in the midst of a dark situation, this book is based loosely on a true event that took place during the Siege of Sarajevo in 1992. I’m embarrassed to admit that I knew very little about this atrocious violent massacre during the Bosnian War.
The centerpiece of the book is the true story of a professional cellist with the Sarajevo Opera who performed in the midst of a battle zone for 22 days to honor 22 innocent citizens who had been killed while waiting in a bread line. The people of Sarajevo and the music they heard are honored in this book narrated by four main characters. The story is one of humanity and dignity in the face of brutality. The redemptive music is the backdrop for this amazing novel. Don’t make me say it again – read this book.
Posted by Harriet Riley at 8:26 PM No comments:

A Tale of Two Islands

By chance, I recently read two novels set on remote islands. It was pure coincidence, but it helped me think about setting, plot and character in fiction. The island setting in both books serves essentially as a character and helps develop the plot.

The first “island” novel I read was M.L. Stedman’s The Light Between Oceans. It was recommended by one of my favorite bookstore owners, Valerie Koehler of Blue Willow Bookshop here in Houston. It did not disappoint. The novel was deeply engrossing fiction of the highest order.
I was immediately drawn into the story of Tom, an emotionally wounded man just returned to his homeland of Western Australia after the horrors of World War One. The love of the bright and adventurous Isabel and the desolate setting of Janus Rock help to heal Tom’s scars from the war. Tom is the light keeper on this island, a half day’s journey from the mainland, and the light serves as a symbol for the hope he begins to feel until he is forced to make a difficult decision for the woman he loves. As the story unfolds, every character is looking for some kind of redeeming light. The atmospheric setting of the island and the many layers of the plot help to create a story you will never forget. This is this first novel by this Australian writer. I can’t wait to read her next. 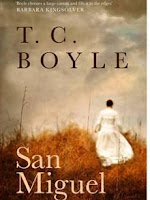 The next “island” book I read was T. C. Boyle’s San Miguel. I heard Boyle speak and read from the book at Inprint Houston’s amazing Margaret Roott Brown Reading Series and I knew I had to read this book immediately. T.C. Boyle is a prolific writer and has won multiple writing awards. I have read his short stories, but never one of his 14 novels.  After completing San Miguel, I was excited to know that I have so many more of T .C. Boyle’s books to enjoy…and I will.
San Miguel tells the story of two different families who lived on the island San Miguel off the coast of California at the end of the 19th century and the beginning of the 20th. The novel is based on the real story of these families from diaries, letters and newspaper accounts of their lives. The story is told through the viewpoints of three women.
First we learn the story of the unhappy Marantha Waters, who, along with her daughter, is brought to the island off the coast of southern California by her second husband. He promises her that the ocean air will heal her consumptive lung disease, but in reality the damp, windy atmosphere ultimately kills her. The story is next told through her strong willed daughter Edith, who is essentially imprisoned on the island, by her stepfather. The third and last section is about the Lester family as seen through the loving eyes of Edith, wife of Herbie. The newlyweds move to the island in 1930 filled with love for each other and excitement about their new home. They go on to have two children on this remote, desolate place as Herbie’s manic-depressive personality overpowers Edith’s optimism.
The women in Boyle’s novel are rich in the depth of their characterization. The island of San Miguel is more than the backdrop to their lives; it is a force to be reckoned with and battled against in both families.
The two husbands are war veterans in Boyle’s novel, just as the male protagonist in the Stedman novel. The islands in both novels are places of refuge and healing for the men, but unforgiving, relentless prisons for the women.  Both books made me realize how the setting in which we live influences the lives we lead.  And how the setting of an island can create unforgettable novels.

Posted by Harriet Riley at 10:01 AM No comments: 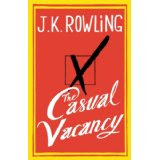 Don't pick up The Casual Vacancy expecting to experience anything you've ever felt in J.K. Rowling's previous seven books about Harry Potter. Pagford, the small English town, and its school, Windowne, is not Hogwarts. And none of the teenagers in this new novel by the most-read living author are anything like Harry, Hermione and Ron.
The teenagers in TCV are, however, the most richly described and the most likable characters in this vitriolic novel. The adults are all conniving, spiteful, miserably married or deluded. The only truly good and well-liked adult, Barry Fairweather, dies in the first chapter and haunts the rest of the novel. His goodness serves to reflect the hateful impulses of the rest of the adults. The teenagers have our sympathy and support throughout the book.
I can forgive the teenagers lapses in judgment only because they are hurtful to the parents and other adults who make their lives miserable. Each home in the outwardly charming town of Pagford houses its own terrible secrets and every person is destroyed by those dirty little lies and pretense. Only the ghost of Barry Fairweather (great name!) tells the truth.
The book is also about the smugness of conservatives and the hard reality of the lives of families living in poverty. It’s not an easy book to read. But real life isn’t easy.
I am very impressed with J.K. Rowling for writing this novel. It must have been difficult to depart so resolutely from the audience and the tone of her other novels.  But, of course, if you’re J.K. Rowling,  you can probably get anything you want published. I recommend this book. Even though it doesn’t necessarily have a “happy” ending, most of the plot line is resolved.  Just don’t expect this book to be anything like the J. K. Rowling you’ve ever read before. And be warned: Don’t encourage children under 16 to read this gritty and grimy account of life in a small town.
Posted by Harriet Riley at 3:09 PM No comments:

Books and Their Homes

Thanks to my e-subscription to Shelf Awareness, I just read a delightful column called "People of the Bookshelf" in The Global Mail. Written by one of my favorite authors, Geraldine Brooks, she confessed her secret dedication to preferentially shelving her own personal collection of books.  Brooks said she arranges her books "as she would guests at a dinner party," putting together authors that she thinks might be able to strike up a pleasant conversation. She said she likes to "imagine them, shelved side by side, comparing notes on the mores of their respective eras."

I just went through a similar dilemma when we added beautiful new built-in bookshelves in our "book nook" at the top of the staircase in my home. I had the shelves built for our collection of children's books. Even though my children are now 17 and 20, I can't bear to say goodbye to books that have been around since my father was a little boy, and I was a young girl. There are books given to my children by their late father and grandparents. These are books I have wonderful memories of reading to my girls over and over.

Last week, I spent an emotional evening placing these precious books in the new shelves and I must confess I was a bit obsessive about their arrangement. I wanted Maurice Sendak next to Charlotte Zolotow. Then I put all our dog books together; I put Rosemary Wells' McDuff tales next to Alexandra Day's Carl books. I gathered every book about bunnies (and we had a lot) and placed them on the same shelf. My collection of fairy books took a place of honor. And my sister and my beloved Edith, the Lonely Girl, books by DareWright were placed in their own safe top shelf. I found it extremely satisfying to put all these special "friends" together in one place.

Now the rest of the books in the house are not as organized. My husband and I have bookshelves in several rooms filled to bursting and stacks of books on our bedside tables overflowing to the floor below. But if I could just have some more bookshelves built, I could organize the rest of my books…

So I want some feed back from you, my silent readers. How do you arrange your bookshelves? Email me or post to this blog. XOXO