As an active book blogger and huge fan of To Kill A Mockingbird (public library), I feel compelled to write my review of Go Set A Watchman (public library) as soon as I've finished it. My friend Evelyn and I were first in line at our local independent bookseller earlier this week here in Houston when the book was released on Tuesday, July 14. 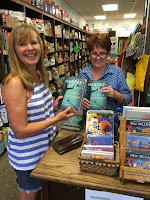 Actually we were the only ones in line. And no one else showed up the whole time we were there. Both booklovers from Mississippi, Evelyn and I thought for sure, in such a big city, we wouldn’t be alone. But we were the only geeks who got up early on a Tuesday to get the first copies of the controversial, long awaited second novel from the reclusive 89-year-old Harper Lee. 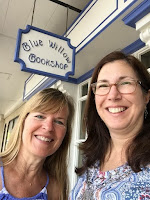 I started reading the book that very evening, and was drawn into the story of a grown up Scout coming home from New York City to Maycomb, Alabama at age 26. Even though I'd read the reviews and was prepared, I had the same reaction as Scout on page 103, now called by her given, Jean Louise, when she said,

Atticus? I was in as much shock as Jean Louise. But as the story continued, I felt very comfortable with the situation. It felt so much more real to my experience of the South. I was born in 1959, so I’m much younger than Harper Lee and her fictional Jean Louise. But the men of Meridian, Mississippi were much more like the Atticus Finch of Go Set A Watchman than the Atticus of To Kill a Mockingbird. My father included. There was an Attticus in our town, but he was pragmatic, I’m sure, just like this new version of Atticus.

The book is about Jean Louise Finch coming home and seeing the South and her revered father, Attitus, in a new light. Jean Louise worshipped her father, who taught her to be color-blind and treat every human equally. She is literally sick to her stomach when she discovers her father at a Citizens Council meeting during her visit home. Harper Lee does a beautiful job of showing all the nuances of the situation in the South in the mid-1950s. The content is important for us all to read today in light of the racism that seems worse in some ways now in this country.

Readers will have the same repugnant reaction as Jean Louise, but you mustn’t let it stop you from picking up this very enjoyable book. Harper Lee weaves a great story with flashbacks and engaging dialogue and small town humor.  I cried and cried at the end. I guess daddy issues are something most of us can relate to. Jean Louise’s emotions touched something deep in me. I remember that feeling of disgust toward my South (and also my father at times) when I was in my 20s and my reluctance to stay in the South to fight to make things better.

Another reason I really enjoyed reading Watchman is that I kept thinking about how it was a first draft. This was the manuscript that young Harper Lee took to her editor originally. The editor asked her to ditch that narrative and write a new novel about a younger Jean Louise (Scout) and the trial of the wrongly accused black man that was mentioned in Watchman.  The original manuscript was probably too controversial in the early 1960s. So the whole time I was reading the book, as a writer, I was very interested in how Lee took the thread of the young Scout shown in this book and turned it into To Kill a Mockingbird. This increased my appreciation of Harper Lee as a truly great writer.I'm proud to add this first edition on my bookshelf, next to my signed first edition of Mockingbird. 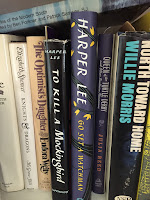 So read your copy (I know you pre-ordered one) and enjoy the story and re-visiting old friends - Scout, Atticus and Maycomb – and remember it's just fiction. Forget the controversy and enjoy the book. Go Set a Watchman doesn't Kill the original Mockingbird, it just adds to the story we all love.
Posted by Harriet Riley at 12:02 PM