The Secret of Life and Imperfect Parenting 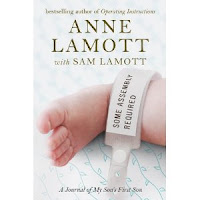 I have been an Anne Lamott groupie for almost 20 years. I can pinpoint the time I became a fan to just after I gave birth to my first daughter. A dear friend gave me Lamott’s book, Operating Instructions: A Journal of My Son’s First Year, and I knew I’d met my “soul mate” of sorts. Lamott is brutally honest in her reflections on motherhood in this book. I’ll always remember her description of being so frustrated with her crying baby son that she had serious thoughts of throwing him out of the window in the middle of the night into the freezing snow. It was comforting to know that I wasn’t the only mother to feel exasperated with motherhood. She was candid about her inaptitude and her impatience with her precious baby boy Sam.  In the ensuing years, Anne has written numerous other books - both novels and essay collections - which have also been frank and funny about her life and the human condition. Now 20 years later, she has written her second “parenting” book – this time about grand-parenthood.  Her only child, Sam, has fathered his own son at age 19 and Anne sets out to record the first year of her grandchild’s life in Some Assembly Required: A Journal of My Son’s First Son.
Now I have not yet had the pleasure of becoming a grandparent (and am not quite ready for that), but I enjoyed this book as much as any of Anne’s others.  This book, just like Operating Instructions, is written as a daily journal account of her grandson’s first year starting with just before Jax’s birth and ending around his first birthday. Her self-depreciating style of humor makes you laugh and her view of life makes you cry. Anne Lamott is deeply spiritual, but in a nonthreatening way. She is constantly trying to live in the moment and “leave people to their destiny” and not try to control situations. But just as this is a continuous battle for each of us, it is for Anne.
This book tells a story, but it is full of nuggets of wisdom. I started the book turning down little corners on pages that I might want to re-read and underline. But I finally gave up and read the book with a pencil in hand. Anne is honest about our imperfect parenting as she says at one point, “It is a violation of trust to use your kids as caulking for the cracks in you.” She shares the fierce love for her son that we all feel as parents, especially mothers. At one point she says, “You love your kids way too much to ever feel safe again.” That is a wonderful way of describing the combination of deep pain and great joy brought on by parenthood. She sees all those same feelings she has for her son, Sam, reflected in his eyes when he looks on his own son, Jax.
Grandparenthood seems just as precarious and wonderful as parent hood as Anne describes her first year.  Anne’s situation is particularly fragile because the mother of Jax, Sam’s girlfriend, seems constantly on the verge of moving to another city with Jax. And as the grandparent, Anne, has no control over that situation. She has to breathe deeply often and says you just have to “show up and ask God for help.” One of the best parts of the book was when she shared the secret of life. I stopped reading, put down my book and copied Anne’s words into an email for my daughters that I sent immediately. I won’t tell you the secret of life here. You’ll just have to read the book yourself. It’s a totally wonderful read and if this is your first Anne Lamott book, it won’t be your last.
Posted by Harriet Riley at 4:37 PM No comments:

“I write to answer questions.”  This statement by Mississippi native Norma Watkins described most of the writers I heard as a participant at the 19th annual Oxford Conference for the Book in March. This enjoyable free three-day event was packed with interesting panel discussions, author meet-and-greets and social activities for the literati – both visiting and local.  I was able to fit in only three panel discussions on Saturday morning, but in just under three hours I heard from nine writers and one literacy advocate.
I was most inspired by the three writers at the panel on writing memoir. Norma Watkins, author of The Last Resort: Taking the Mississippi Cure, said her book started as a journal, then turned into a novel and was finally published by The University Press of Mississippi in 2011 as a memoir. She urged writers to “tell your stories” because “you are the memory keepers.” Watkins, who teaches creative writing in California, told writers to make a list of the times in your life when things changed. And then to show, not tell, what happened at each of those times. She encouraged writers by explaining that if you write a page a day, you could have a book in a year.
Memoirs are a piece of an author’s life and writer Randy Fertel shared his family background in The Gorilla Man and the Empress of Steak: A New Orleans Family Memoir. Fertel said he found it therapeutic to re-tell his stories as he was seeking to understand his colorful father. Fertel’s mother was the founder and owner of Ruth Chris Steak House and his father was a wealthy New Orleanian who once ran for mayor on a promise to bring a gorilla to Audubon Zoo. Their son tells their story and his in this funny and honest book, also published by The University Press of Mississippi. The next speaker, Sam Haskell, said you must understand yourself before you can write your memoir.  His memoir, Promises I Made My Mother, is about growing up in Mississippi and is a tribute to his deceased mother. Haskell, a former Hollywood agent, sold his memoir idea before he even wrote the book.  The act of writing forced him to face many truths about himself and answer questions he had not previously asked.
The Oxford Conference for the Book was a gem of an event and I hope to return each year to be inspired by readers, writers and publishers in one of the most charming towns in America.
Posted by Harriet Riley at 3:49 PM No comments: